Looking at the Royal Navy order of battle on the eve of war, it looks like a pre-eminent naval power, no longer dwarfing its rivals but certainly not outmatched by them. But beneath the numbers and classifications, the royal oak was rotting from within. British aircraft carriers were conceived as reconnaissance platforms, not strike platforms, their handful of new battleships were functionally inferior in armament, mechanical reliability and gunnery method to those on the continent, let alone US and Japanese production, their elegant six-inch cruisers outgunned by the eight-inch cruisers and pocket battleships of other navies, and their escort force woefully insufficient in anti-submarine and anti-air roles even after two decades.

On the eve of the Second World War, Britain’s Navy faced an escalating deployment crisis. Even as the defeat of France approached, the British Cabinet persisted in trying to persuade Italy to adopt a neutral position. When France fell, they sank the French Navy in port to prevent the Axis from acquiring those ships. These two measures were aimed at avoiding confrontation in the Mediterranean, in order to free up elements of the Mediterranean Fleet for transfer to Asia, where British colonies were targets for Japan’s imperial expansion and the United States seemed likely to remain neutral.

If you read the order of battle on the eve of the war, the Royal Navy still seemed to be the strongest in the world, a balanced force which included a substantial fleet of cruisers and destroyers to mind the far-flung Empire and a core of battleships and aircraft carriers. The Mediterranean Fleet alone boasted eight cruisers and thirty-five destroyers. The Royal Navy’s only peer, on paper, was the United States, Britain’s calculated imperial successor in the Western Hemisphere.

But nearly all of the modern cruisers were light cruisers- weight of fire had been sacrificed in favour of hull numbers. The seemingly endless roster of destroyers included slow, outmoded designs, and, as with the cruisers, these began to sacrifice armament for numbers of hulls. There were a few bright spots- the beautiful Crown Colony class light cruiser, the Tribal class heavy destroyer- but on the whole, the fleet was increasingly an empty shell.

The Battleship force was slow to recover from the naval treaties (which, however, had probably saved the Royal Navy as a world-class force for an additional twenty years); the new Nelson and King George V classes were deeply flawed designs. Despite having been the first country to demonstrate the power of aviation over battleships (on a captured German battleship in Scapa Flow), the Royal Navy had never paid sufficient attention to carriers (which they regarded as reconnaissance tools, and thus did not design to carry large air wings) or to anti-aircraft armament. Perhaps the worst omission of all was a lack of dedicated anti-submarine escorts, which would have to be built hastily during the war.

It was inevitable really- the Great War had set the Empire on a course toward bankruptcy. Britain’s own economy was never the same, and the financial model of the Empire was deep into the red, particularly in India. The Second World War would see British gold carried away to the United States, and with it the financial tools of imperium.

Construction during the Second World War for the Royal Navy would see excellence ultimately emerge in one category only- the anti-submarine destroyer. While other programs persisted until the end of the war, the Royal Navy would never field an equivalent to the American Iowa, Alaska, Baltimore or Gearing classes, and its carriers, though numerous, were often not capable of fleet speeds. Most of the capital ships constructed during this time would be prematurely decommissioned or sold after the war.

Today, the United States is far from being the Royal Navy in 1939- but perhaps it is not so different from the latter in 1920. The US economy is in a state far worse than that of the Great Depression. It has not just finished a world war- but its sustained spending during the War on Terror has easily matched the height of the Cold War. As with Britain, this expenditure cannot be sustained. As with Britain, increasingly complex technology is creating procurement and production problems. The United States, like Britain, is increasingly choosing quantity over quality- the Super Hornet, the Littoral Combat Ship, the continuation of Arleigh Burke class destroyer production, the F-35- and getting neither. The F-35, initiated as the economical option, may yet become the most expensive aircraft in history. Lead time for new systems has ballooned. Gone are the days when fighters could be designed, fielded, upgraded and replaced within ten years. Now, we are lucky to see production begin within that time. Never have the individual systems been so capable. Never have they cost so much.

The United States lacks at least two of the things that worked in Britain’s favour. Unlike Britain, it seems incapable of making judicious defence cuts, and, for related reasons, it does not exercise effective control over its defence industries. The United States defence procurement cycle is thoroughly under the control of industry, as well it might be in a world where Pentagon officials and officers retire to jobs in the industry, where the military industrial complex is one of the last world-beating industries in the country, and where procurement is regarded as a form of pork-barrel politics.

I leave it to my readers to decide for themselves what insights this comparison can and cannot confer- it is, admittedly, far from an exact parallel. The US Navy is far from becoming an empty shell, and still enjoys a very comfortable numerical margin against its nearest rivals. I began with the Royal Navy’s deployment crisis. When the world’s largest naval force is overstretched by its commitments, even numerically inferior forces can do significant damage. Note that Britain failed miserably in defence of her Asian holdings against the Japanese, and would have failed to keep the Atlantic open but for American aid. Unlike Britain, the United States is in a position to prioritise its global commitments, and its spending priorities- and now is the time. 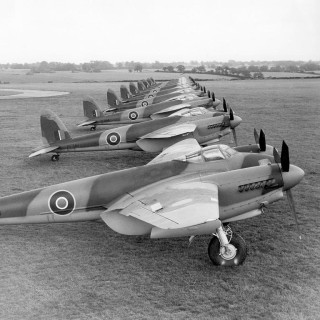